This is a lot harder than I thought it would be and, as usual, I'm losing interest. Perhaps I shall make one last valiant effort to complete the Men & Magic portion of the rules. 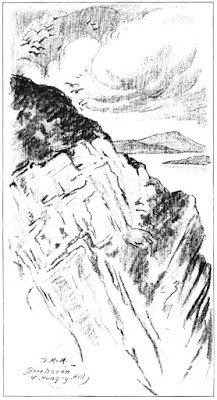 Encumbrance represents the effect of weight carried. In general, the starting tools, sundries, and worn armor carried into the dungeon or wilderness are not weighed and tallied but weapons, additional armor, and any items acquired during expeditions ARE tallied.

Time is the essential factor of the game. The referee should obtain a calendar of some sort to track days, weeks, and months accurately. Smaller, but no less important, units of time include the round (1 minute) and the turn (10 minutes). Rounds are mostly used to track time in combat while turns are used to track exploration. It is assumed that a party will move as fast as its slowest member in order to maintain formation and defense; if a full retreat is being enacted then no such compulsion exists.

Encounters (Wandering Monsters)
For every two turns spent exploring, there is a 1-in-6 chance that a random encounter will occur. These encounters may be native monsters, invaders, or other adventurers. The monster will be up to 2d6x10 feet away in dungeons or yards in the wilderness; randomly determine its point of entry, ignoring illogical routes such as the empty room the party just left. Note that more encounters can occur during combats due to either third parties or reinforcements.

Reactions
Not all encounters, even those between Lawfuls and Chaotics, need be combat. In some cases, a reaction will be obvious; Retainers of the Baronet who sponsors the party should have no reason to attack unless they or the party are traitors; Hobgoblins have no reason to be friendly and every reason to attack a party who has penetrated their warrens. When the referee has no strong idea of how an encountered character will react, he should roll below, applying the reaction modifier of the party member with the highest Charisma (unless the party wishes to nominate someone else as their "face").

The referee may wish to make adjustments to the reaction roll based on biases: An anti-cleric may not immediately attack a cleric but it will sour his demeanor, while a judicator may put a whole party to the sword due the presence of an anti-cleric.