Inspired by this post by Joseph Manola I read years ago and late-night sleepy thoughts.

While Ye Olde Snake-Men Empire isn't a bad idea, I feel it's been suffering a bit of overexposure in the OSR, a critcism which extends to my own WIP setting. Until yesterday, I was riffing heavily on McKinney's Carcosa with the Serpentine (snake-men) being the creators of Mankind for the purposes of occult science. The Kuo-Toa (or their off-brand OGL equivalents) popped into my head as something cool to add to the bestiary. I had originally thought of them as enemies of the Serpentine, Men, and Elves but then I realized they fit the role I wanted the Sepentine to play. 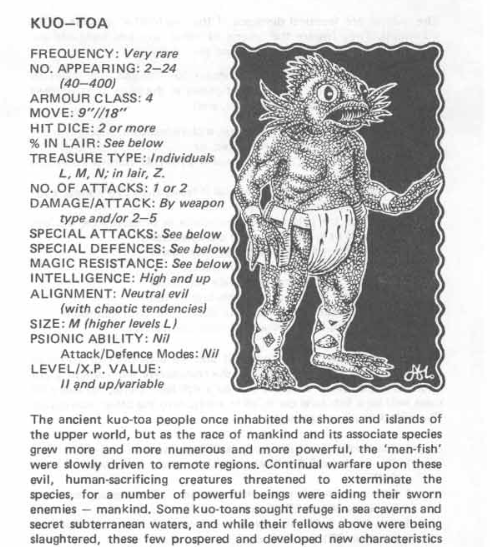 You may ask, "Buzzclaw, what's so special about fish-dudes?" You're right to ask that. My first foray into the Kuo-Toa (and the D&D brand) was 3e; I wasn't impressed. They seemed like generic fishmen. Then recently (this year, I believe), I got a chance to read D2 - Shrine of The Kuo-Toa. That won me over. Horrible, amphibious fish-men ruling and rampaging throughout sea, land, and underworld, kidnapping (fishing? manning?) people for dark rituals. Then the land and sea groups went extinct, leaving only the underworld-dwellers. But they still remember those upstart Men and they're dreaming up schemes of revenge. That's some good shit right there.

Legacies of the Kuo-Toa

Assuming then, that the man-fishes had a stereotypical empire like the classic snake-men, what did they leave behind?

1) Magic! In my own setting, the (off-brand) Kuo-Toa created occult science (less icky Carcosa rituals) then Elves used some of their notes + demonic consultations to create classic D&D magic.

2) Magic Items! In their monster entry, Kuo-Toa really like to use daggers and spears; embellish that dagger +1 with aquatic motifs!

3) Monsters! Land lampreys. Land Urchins. Mantari. Behemoths from the Lankhmar sets. Cloakers too. What's a Roper but a weird-ass land-squid? Are Koalinths and Scrags aquatic versions of Hobgoblins and Trolls OR did the Kuo-Toa take aquatic creatures and create terrestrial versions? Are Mermen and Tritons prototypes or alternative research for Project: Man?

4) Dungeons! All those ruins and tombs are the handiwork of the vanished man-fishes. Are you a bad enough party to dive into ancient, pre-human ruins in search of loot?