More on McKinney's Carcosa, the Lovecraftian Pantheon, and D&D 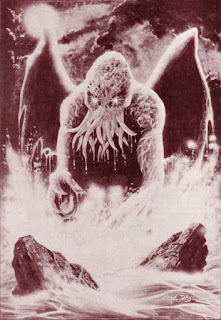 I noted in my previous semi-review of Carcosa that McKinney's take on the Lovecraft mythos was a bit odd. Only much later (or much recently) did I realize that his takes are derived from AD&D Deities & Demigods. I didn't notice it despite having read D&DG before because I read it during a different phase of my roleplaying days when the idea of PCs actually fighting gods seemed to be atrocious Munchkinry (I've since changed my attitudes). But that just raises more questions: Are the quirks of the D&D Lovecraft mythos examples of temporary fan theories, corporate obfuscation, or something else?

2 Warps to Neptune catalogs two sets of scans: the OD&D version of the Lovecraft mythos solely by Kuntz and the AD&D D&DG version by Ward and Kuntz. Note that Kuntz's version mentions the Ubbo-Shatla/Abhoth aspects of D&D Shub-Niggurath like I did. The OD&D Shub-Niggurath also does not spawn Elder Things, Deep Ones, or Mi-Go. Kuntz's OD&D Cthuga and Ithaqua also match the descriptions I've seen in Chaosium products unlike the fiery amoeboid and evil humanoid cloud of D&DG. It's unclear why Kuntz/Ward altered the (relatively) faithful OD&D adaptations into the more divergent D&DG versions.
Posted by Buzzclaw at 7:42 PM