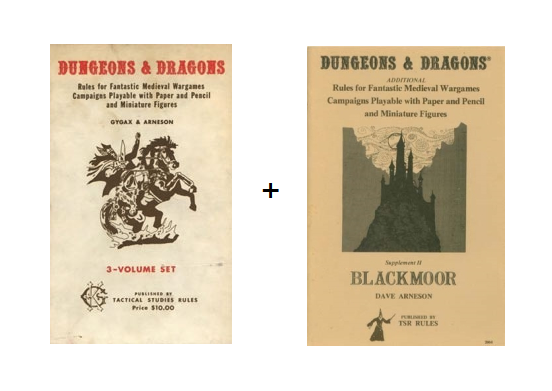 Greyhawk may have been a mistake

You may have heard about the OD&D Implied Setting, an interpretation of the implicit setting of the original edition of Dungeons and Dragons based on a close reading of encounter lists et cetera. This post is about what setting is suggested when you only use the Little Brown Books (Men & Magic, Monsters & Treasure, Underworld & Wilderness Adventures) and Blackmoot; It's not in-depth.

Classes are different: Assassins, Clerics, Fighting-Men, Magic-Users, and Monks. While the core trio (Cleric, F-M, and M-U) suggest a European milieu while Assassin (if interpreted as a ninja) and Monk suggest an Asiatic milieu.

Combat uses the Alternative Combat Rules + Hit Locations. An interesting aside but combat is a bit different (and not necessarily better)  with Blackmoor, acting almost like a proto-I.C.E. system.

The monsters deserve more discussion based on certain trends. Namely, there are a lot of very tough aquatic monsters and very few people (or demi-people) out there. On the flipside, there are very many relatively weak terrestrial creatures. Many monsters are derived from British or Greek legends.

The way I interpret this is that setting of the LBB + Blackmoor is one in which wealthy coastal cities (which are vaguely British, Mediterranean, or Asiatic) flourish while the landlocked interior is home to poor and desperate people fighting for survival and wealth. Almost anything in the interior has been plundered; there are no more tombs to plunder or dungeons to find. But in the seas, oh, in the seas! Every island, reef, and shipwreck hints at treasure and terrors.
Posted by Buzzclaw at 1:26 PM