It's been a while. I've been through some exciting stuff since I last posted. The woman I though loved me and my money turned out just to love my money, my family has gone from wanting me to get a job and move out to not get a job and stay, I quit work twice, and my dog is dying of cancer. I probably should euthanize him but he's fighting; I'd rather respect his struggles and help him against the inevitable. Of course, once he dies (which should only be a few more months now), I have no real reason to live with my family anymore so I plan on becoming a drifter/homeless. 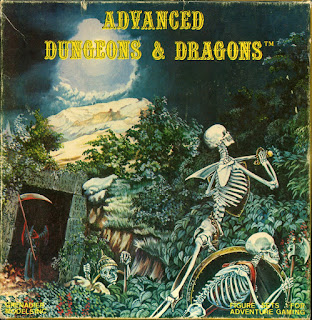 So, if I were not about to become an American Nomad, I would start an open table D&D game at my LGS.

· The ruleset would be either Holmes or Moldvay Basic D&D. Retroclones may be easier to access and "readable" but from an advert perspective, any version of D&D is going to draw more interest than a knock-off of Old D&D.

· Taking a page from Mutants & Magic, both characters and players gain XP, although this is tracked separately. This rewards people who tend to drop in a lot but want to make their own characters later.